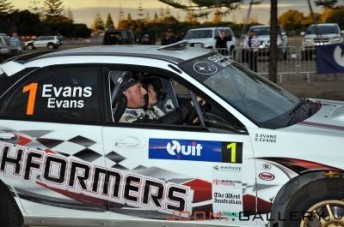 Simon and Sue Evans lead the way in WA

Simon Evans has sounded an ominous warning to fellow competitors at the QUIT Forest Rally after he took the lead after the opening two stages of the second round of the Australian Rally Championship in Busselton, Western Australia.

Evans was typically buoyant all afternoon ahead of the opening stages on the Busselton waterfront and showed that he and co-driver Sue Evans will be the ones to chase this weekend.

“We had a good test and we’re ready to go,” said Evans.

With all cars now on full spec Kumho 15” rally tyres, Evans was able to push his Tankformers Subaru to a narrow 0.3second advantage at the Busselton Special Stages which were held on tarmac ahead of the longer, gravel stages the cars will be competing on this weekend.

In second place was a fast finishing Justin Dowel. Dowel’s second run was the fastest stage time of the night, giving the Activ RallySport team their first stage win in the ARC.

Rounding out the top three was Ryan Smart in a Toyota Corolla Sportivo.

“We put a fair bit of preparation into the car- and it builds your confidence,” said Smart.

“We’re confident- we were here last year and the stages are much the same and we have a good car setup and stage notes.”

Series leader Scott Pedder had an ordinary start to his Forest Rally campaign after a brake issue during shakedown that ended in a concrete barrier and a slower first stage. A faster second stage leaves the Pedder Suspension Rally team in fourth overall and a better frame of mind, giving away just 3.3 seconds to Simon Evans.

The rally heads to the forests around Nannup for the remaining eight special stages totalling 103 competitive in the opening leg.