Ricciardo sets the pace in Renault 3.5

Ricciardo sets the pace in Renault 3.5 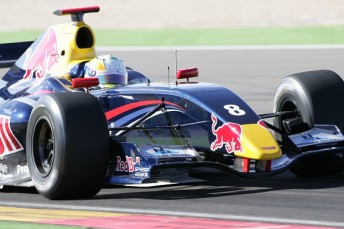 Daniel Ricciardo has set the pace at the Motorland Circuit in Aragon, Spain during practice ahead of the opening round of the Formula Renault 3.5 championship.

The 20 year-old Red Bull Junior racer was second quickest in the morning, before he went 0.2s faster in the afternoon and set the quickest time of the day.

Ricciardo’s pace was all the more impressive considering he missed the last group test at Motorland due to his commitments as reserve driver for the Red Bull and Toro Rosso F1 teams.

The West Aussie said he was pleased to be on top of the times.

“Today wasn’t necessarily about setting the fastest lap, it was about getting the best set-up on the car and gaining confidence after missing some of the pre-season tests,” he said.

“The car feels great, it feels very well balanced and I’m very happy with our low downforce set up, which we have to run in qualifying and the race tomorrow. I’m pleased with the work we’ve done as I feel confident ahead of qualifying tomorrow and to finish the day quickest was an unexpected bonus.”