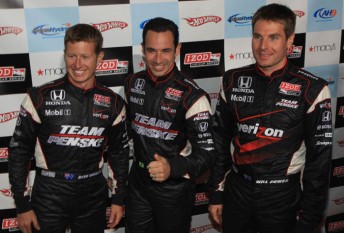 Australian IndyCar stars Will Power and Ryan Briscoe have both performed well in practice for the Toyota Grand Prix of Long Beach in California today.

But it was American driver Ryan Hunter-Reay who ended the day with the fastest time, giving a boost to the Andretti Autosports squad after the early season domination of Power, Briscoe and Helio Castroneves’ Team Penske operation.

“This year I’ve been driving with Level 5 quite a bit. It’s a great team and the opportunity really presented itself where I could do both races. Both teams are pretty cooperative letting me drive in both series. It shows that they have a lot of faith in my abilities. I’ve been used to jumping in and out of race cars pretty quick. So I think I can adjust to things pretty well. The lines will be the same. The braking and shifting points will be different, though.”

Power topped the timesheets in opening practice earlier in the day but could only manage fifth fastest in second practice.

Power was satisfied with his run at Long Beach today, the street circuit where he won in 2008 and was runner-up last season.

“We are reasonably happy with the # 12 Verizon Team Penske car,” said Power.

“We need to find a bit more speed. It is really close out there, really competitive. We will work on it tonight, and we should be in great shape tomorrow for qualifying.”

Briscoe was close to the front in both sessions, ending the day with the second fastest time after sitting in fourth place in first practice.

Briscoe admitted that being quick here in Long Beach was important to bridging the gap to team-mate and friend Power.

“He’s definitely going to be the one to beat in qualifying tomorrow. He’s been fast here in the past. I think as a team, we’re extremely strong at the moment.

“We’re really pushing each other a lot. There’s a really good vibe within. And I really feel like coming into this part of the season, I really need to step it up in qualifying.

“For sure, to get the race wins, my first step is going to be stepping it up in qualifying.”

Tony Kanaan was third fastest in Practice 2 ahead of Alex Tagliani, with Target Chip Ganassi drivers Dario Franchitti and Scott Dixon down in seventh and 10th places respectively after both being in the top five in first practice.