Whincup says Van Giz is the one to watch

Whincup says Van Giz is the one to watch Reigning V8 Supercars Champion Jamie Whincup predicts Shane van Gisbergen will be the man to watch this weekend in Hamilton.

Whincup, who won both races at the New Zealand street track last year, says that of all the local Kiwi drivers, van Gisbergen is the biggest threat this weekend.

“There’s a couple of local kids who can do the job. Shane van Gisbergen has had some great form lately and he’s the local guy to watch,” he said

“But there’s probably eight or nine cars out there if they do the best job on the day, will most likely stand on the top of the podium. 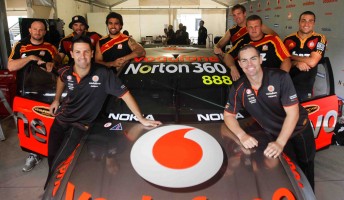 While Whincup is hoping to keep van Gisbergen and the rest of the pack behind this #1 TeamVodafone Commodore VE this weekend, he said he doesn’t want a repeat of his first attack at the Hamilton track where he didn’t make it past qualifying due to an incident.

“I have bitter sweet memories from Hamilton,” he said.

“In 2008, I didn’t even make the race with the massive write off in qualifying, and then we came back and won both races last year. It’s been up and down. Who knows what 2010 will bring.”

Whincup says that the final section of the Hamilton track through the industrial region of the 3.4km track is his favourite.

“That last little section of the track through the industrial area, there’s walls either side and that can gob you up pretty quickly,” he said,

“It brings you back to when I was a teenager, hanging out in the industrial block in the back streets! That’s by far the best part of the track for me.”

V8 Supercars hit the track tomorrow for the first of four practice session at 10.05am NZ local time.