Holdsworth has his eye on series top three

Holdsworth has his eye on series top three 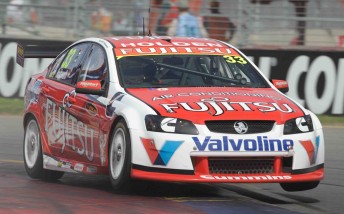 Lee Holdsworth has his eye on leaving this weekend’s Hamilton V8 Supercars meeting inside the top three in the championship – and he wouldn’t mind taking home the Mark Porter Trophy, too.

With 300 points on offer over the two 200km races, his desire isn’t impossible, and after scoring a podium finish in Race 5 of the V8 Championship in Adelaide last month, Holdsworth is expecting big things in New Zealand this weekend.

“Our cars have great speed at street circuits. Over the past couple of years at Hamilton, we’ve had really good car speed and top three pace.

“I think we’ve made further improvements to the cars since last year. The team has really lifted and I’m fairly confident about a really strong result there. There’s no reason why we can’t be in with a chance of winning.”

Before the start of the year, Holdsworth and the GRM team were cautious about stating their championship chances as they felt they’d struggle at the low-grip Middle Eastern tracks. Both Holdsworth and team-mate Michael Caruso left Bahrain inside the top 10 in the title, and fast form at Adelaide has kept them there.

“We got out of Abu Dhabi and Bahrain with some solid results. We actually came away with better results than we expected,” he said.

“At Clipsal, we knew we’d be quick there. We had to get a result there – it was kind of expected – so it’s good that we’ve been consistent and getting good bundles of points.

“New Zealand has been kind to us in the past, so we’re all looking forward to getting into it.”

Races 7 and 8 of the V8 Supercars Championship Series will be held this weekend at the Hamilton street track, with the winner of Race 8 (on Sunday) awarded the Mark Porter Trophy (in honour of the late Mark Porter who died due to injuries sustained in an accident at Bathurst in 2006).