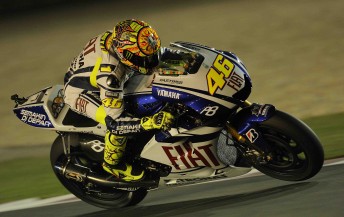 Valentino Rossi on his Yamaha at Qatar

An eventful opening race of the 2010 MotoGP World Championship at Qatar has seen Valentino Rossi take victory after Australian Casey Stoner crashed out.

An exciting start saw Dani Pedrosa (Repsol Honda) shoot up from seventh on the grid to lead the field into turn one, and as the opening laps unfolded, the Spaniard, Rossi, poleman Casey Stoner (Ducati Marlboro) and his team-mate Nicky Hayden commenced a battle at the front.

Stoner’s run at victory ended early when he lost the front of his bike going into turn four on the fifth lap when in the lead, dramatically ending his race after he had been the huge favourite to take victory at the circuit for the fourth successive year.

That elevated Rossi to first place, with Dovizioso and Hayden behind him in hot pursuit. Rossi’s Fiat Yamaha team-mate Lorenzo also started to climb, moving up to fourth at the midway point of the race.

Dovizioso started to challenge Rossi and at one point took the lead from the World Champion, only to see it reclaimed. Hayden then swapped places with Dovizioso as the pair intensified their fight for second and third position respectively.

Lorenzo made his move and went through on Hayden before passing Dovizioso as well to move into second position as the riders entered the final lap, which delivered a grandstand finish in the battle for the final podium position.

Dovizoso claimed third in a sprint for the line as he held off Hayden by 0.011s.

In the first-ever Moto2 race Japanese rider Shoya Tomizawa wrote his name into the history books, riding to a brilliant victory, his first in Grand Prix racing.