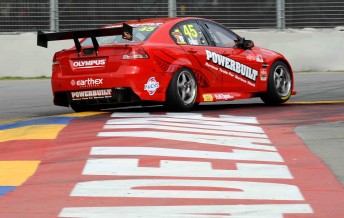 Steve Owen won both races in the first round of the Fujitsu V8 Series at Adelaide. He also won the series in 2008.

Steve Owen will return to the Fujitsu V8 Supercars Series at the next round at Queensland Raceway.

Owen was originally slated to contest just a one-off round at Adelaide last month, but after winning both races, the Greg Murphy Racing team has decided to wheel the ex-Tasman Motorsport Commodore VE back out into action for the second round of the Fujitsu Series at the Ipswich circuit.

GMR team manager Dean Lillie told Speedcafe.com.au that the series leader’s return is a coup for team morale, even if the hunt for sponsorship has been tight.

“We’ve been just getting dribs and drabs of sponsorship for it, nothing substantial,” he said.

“But I hope he can go out and win again. We’ve got most of the guys from Tasman working for GMR now – most of them from New Zealand. After Clipsal, it was the first win for most of the guys since they’ve been in Australia and it has given them a spring in their step.”

GMR has entered three cars for the meeting – Owen, Geoff Emery and a yet-to-be-announced driver. Speedcafe.com.au understands that the spare Commodore VE that is entered for QR is currently in New Zealand painted in Castrol colours and will complete a ride day at new permanent circuit Hampton Downs. Greg Murphy will steer the car.

Meanwhile, Owen was delighted to get invited back for the second round of the Fujitsu V8 Series, but remained cautious about continuing on beyond Queensland Raceway.

“If the ball keeps rolling, it can roll a long way. We’ve got some good momentum,” he said.

“If you qualify on pole, wins both races and break the lap record, sponsors get warm and fuzzy, but if you go to the next round and the engine sprays itself over the ground and you don’t finish a race, the warm and fuzziness disappears. In our situation, you’ve just got to take it as it comes.”

Owen says the big advantage for himself is getting qualifying and race miles in a V8 Supercar in the lead up to the endurance races where he’ll partner Jamie Whincup in the #1 TeamVodafone Holden Commodore.

“Triple Eight is watching with interest and hoping it all goes well,” Owen said.

“It’s a very similar car. It’s a VE, on good tyres at a race weekend. I’m getting all the right miles in the car in the right conditions. You can go to a ride day and do a thousand miles on a set of old tyres on a slippery track … it’s just not the same. That is the biggest factor for me doing the Fujitsu Series.”

Owen will double up his driving duties at Queensland Raceway – also competing in the Friday practice sessions for ‘endurance and rookie’ drivers in the TeamVodafone Commodores.

Up to 25 Fujitsu V8s are expected at the Queensland round, including Jack Perkins, Paul Morris, a Kelly Racing-entered Commodore and new entrant Wayne Miles, an ex-speedway racer driving the former Falcon BF of Michael Patrizi.

The Queensland Raceway meeting will be held on April 30-May 2.