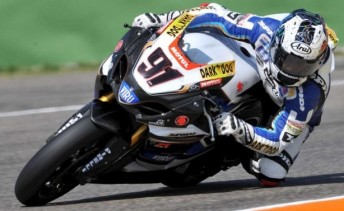 Leon Haslam took a win and a fourth place at Valencia, extending his title lead

Leon Haslam has extended his lead in the World Superbike Championship after taking a win and a fourth place at Round 3 of the title in Valencia.

While it was a great day for the British rider, Australia’s former World Superbike champ Troy Corser had a good event himself, taking his best finish for the BMW Motorrad Motorsport outfit.

Suzuki Alstare rider Haslam demolished the field in Race 1 after early leader Carlos Checa dropped out with a mechanical failure problem. Max Biaggi finished in second, with James Toseland taking third, just ahead of Corser. The Australian made a brilliant start from fifth and led into the first turn, but minor technical issues droped him off the podium.

Race 2 saw Ducati Xerox’s Noriyuki Haga secure his first win of the 2010 season, holding out Checa and Biaggi. Corser dropped down to 12th at the end of the race which was marred by two huge accidents for Simon Andrews and Vittorio Iannuzzo (See video below).

Of the other Australian rider, Andrew Pitt finished 15th in Race 1 and 16th in Race 2.

The next round of the World Superbikes heads to Assen (April 25).