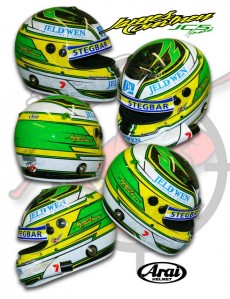 James Courtney has unveiled a striking new helmet colour scheme ahead of this weekend’s V8 Supercars round at Hamilton.

The Jim Beam Racing driver, currently third in the Championship Series, has taken delivery of his new Antman Helmet Design colours today and told Speedcafe.com.au that he wants to give his fast colours a debut win in New Zealand.

“We try and do as best we can on the track, and he tries to replicate that in his paint work – and he’s outdone himself this time!” Courtney said.

“He’s given me a first-class paint job, and I hope I can give him some race wins to compliment that.”

While the race to greet the chequered flag first is still each driver’s priority, having the latest and greatest helmet design is very much a must-win award. Courtney has changed his lid looks a number of times in the past few seasons, but says that this one is his best so far.

“I give Antman a few guidelines – Jeld-Wen and Stegbar want to be where they are – but I like to stay with the green and gold colours. They are the colours that I’ve had my whole career,” he said.

“I like to mix it up as well, change some lines around. I give him a few key points and he comes up with the goods. I reckon this one is his best so far.”