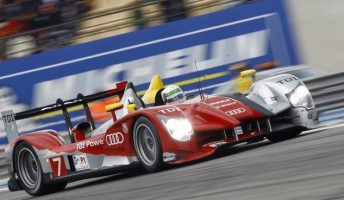 Audi’s new R15 Plus cruised to an easy five-lap victory in the Le Castellet 8 Hours at Paul Ricard, after problems befell the pole-sitting Team Oreca Peugeot in the first hour.

The two diesel powered cars spent the majority of the race some nine laps apart, with both running faultlessly – apart from an air-jack failure on the 908 at its first pit stop, which took 18 minutes to repair.

Peugeot drivers Stephane Sarrizan, Olivier Panis and Nicolas Lapierre eventually fought their way back through to field to fourth, having benefited from a puncture on the sister Team Oreca entry in the final minutes.

The only drama which was to befall the Allan McNish/Dindo Capello driven Audi occurred on the very opening lap, when McNish made contact with Sarrizan while attempting to take the lead. This allowed Stefan Mucke in the factory Lola Aston Martin to slip past the pair of them. By lap three however, McNish would take the lead, and not relinquish it thereafter. A change to wet tyres in the final hour would be the cars only unscheduled pit stop, in an impressive ‘first-up’ display from the R15 plus.

“We have achieved three things,” beamed McNish post-race. “First of all we gave the R15 plus its debut victory, continuing the tradition for Audi’s debut wins of new LMP1 cars. We won the race, which for the team and the drivers was very important especially after our difficulties last year. And for the engineers and the drivers it was very good experience for Le Mans. I think we ticked all the boxes and achieved our goals for this one.”

The Mucke/Adrian Fernández/Harold Primat also ran faultlessly throughout the eight hours, save for two punctures and a late race vibration, taking second ahead of the Andrea Belicchi/Jean-Christophe Boullion/Guy Smith Rebellion Racing Lola.

Despite the new engine rules designed to bring the diesel and petrol engine cars closer together in performance, it was clear from the off that only the Peugeot had the speed to match the Audi.

“I’m very pleased with the result,” he said. “We were clearly not going to beat the factory diesels unless they had a problem, so second is very satisfying. All the drivers and the team did a terrific job, we had one or two little issues to deal with but all went smoothly.”

The LMP2 class would fall to the Nick Leventis/Danny Watts/Jonny Kane Strakka HPD, staging an impressive comeback after earlier losing four laps repairing bodywork. As its only entry, the Gabriele Gardel/Patrice Goueslard/Julien Canal Larbre Saleen took out GT1, while the hotly contested GT2 was won by the Marc Lieb/Richard Lietz Felbermayr Porsche.

Earlier, the Formula 3 Euro Series support races at Paul Ricard were taken out by Edoardo Mortara and Alexander Sims, while title favourite Vallteri Bottas had a miserable weekend – penalised for starting outside his grid box in Race 1, and falling back through the field with a poor start in Race 2.

The Le Mans Series continues on May 9 with a 1000km race at Spa. Aston Martin Racing, however, will head to Long Beach for the second round of the American Le Mans Series next weekend.