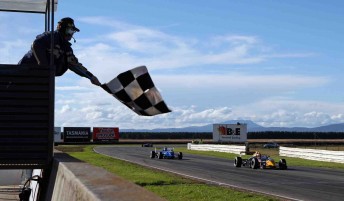 Tom Tweedie was the big winner at the second round of the Shannons Nationals, taking out the 30 lap Formula 3 Superprix presented by Elf Lubricants at Symmons Plains today.

While Kiwi Andrew Waite won the Sunday morning event and led much of the feature race, he eventually finishing in third behind Tweedie and pole-sitter Ben Barker.

For Tweedie, the win added to his victory yesterday and was made all the more sweeter by the fact that he now leads the Australian Drivers Championship heading into the third round at Phillip Island on May 1-2.

“For me and the whole team, it is just unbelievable,” Tweedie said.

“It’s such a great feeling, I had to push very hard, but we have proven that we can win with the older model car.

“Now that we have done it, I hope we can go on and continue the success this season.”

Kostera, driving a Team Mitsubishi Ralliart-prepared Lancer Evo 10, nearly lapped the field in the opening race, but he had to work hard in the second heat, stringing together a series of quick laps to leap frog team-mate Inky Tulloch during the compulsory pit stops.

“It was a good weekend, the car was absolutely faultless the whole time,” Kostera said.

“The team was awesome, the car was really hooking up, and I’m really hoping to keep with the series for the season.”

Tulloch made a cracking start to the Sunday race, recovering after an engine failure in the first heat which necessitated an engine to be freighted to Tasmania overnight from the mainland.

Second overall for the weekend was Bathurst 12 Hour winner Garry Holt, who teamed with local ace Greg Crick aboard his BMW 335i, while the giant killing Mazda 3 MPS of Jake Camilleri was third overall for the meeting.

Matt Kingsley was unstoppable in the Porsche GT3 Cup Challenge presented by Mission Foods, with a clean sweep of the three races, erasing memories of the opening round at Bathurst, where his team left the circuit with a damaged car.

“After Bathurst I really thought it was the end of our season,” Kingsley admitted.

“Fortunately I have really good, dedicated people around me, who put in a massive effort getting the car back together to probably better than what it was before the accident.”

Driving an older model 996 Porsche that was originally constructed in 2002, Kingsley prevailed in the final 40 lap encounter by a whopping 22 seconds.

With at times damp conditions throughout the weekend, positions rarely remained static, with Roger Lago holding on to be classified second for the weekend, with Sven Burchartz bouncing back in third.

The first round for the Shannons V8 Touring Cars National Series finished with Terry Wyhoon on top of the point score.

Despite a small grid of Ford Falcons racing in Tasmania, those racing turned on a fantastic show, with Tony Evangelou winning the second of three races on the way to second overall for the weekend, with Chris Smerdon rounding out the podium.

With the Symmons Plains 50th Birthday celebrations being held in conjunction with the meeting, fans took in many off track displays and parades.