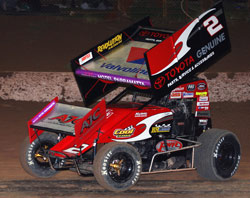 A large number of Australia’s leading Sprintcar outfits have lodged an expression of interest with series organisers to compete in the 2010/2011 World Series Sprintcars Championship.

The opportunity to compete as a contracted team appears as though it will be limited to 12 teams according to recently confirmed full-time World Series General Manager Steven Green.

“At this stage it looks like there will be only 12 teams plus two reserves that will be given contracts for the series, but the final number will come down to budgetary considerations and the desire to make sure locals can still earn a starting spot at each round,” said Green.

Extra rounds of the series, more drivers vying for spots, the action again being telecast on ONE HD and the feature race field to be expanded from 18 to 20 cars are all improvements for the upcoming series.

The 2010-11 WSS will again start at Archerfield Speedway in Brisbane later this year and end with the series grand final at the Perth Motorplex some time in February.