Stoner scores pole in first round of 2010

Stoner scores pole in first round of 2010 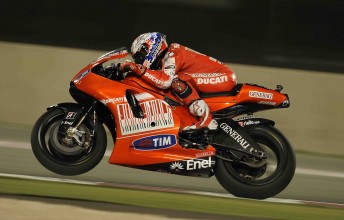 Casey Stoner at the Qatar circuit during qualifying

Casey Stoner will start the first round of the 2010 MotoGP season – the Grand Prix of Qatar – from pole position, as he attempts to win the race for the fourth season running.

The Australian rode his Ducati Marlboro to a best lap of 1:55.007s to place himself in pole position under the floodlit race track.

Reigning World Champion Valentino Rossi (Fiat Yamaha) was second fastest in the hour-long qualifying with a time of 1:55.362, as he ensured his title defense will begin from the front row of the grid in Losail.

Rossi’s Fiat Yamaha team-mate Jorge Lorenzo looks to be in good shape despite some concerns over his fitness that were still lingering at the start of the weekend. Any such questions were answered with a strong display as the Spaniard timed in at just over half a second off Stoner’s pace to complete the front row.

Heading up the second row will be Randy de Puniet. The LCR Honda rider’s progression throughout the weekend continued with a best time of 1:55.831, putting him in fourth position and making him not only the fastest Honda on the starting grid but also the highest-placed private rider.

Loris Capirossi (Rizla Suzuki) will start his record-breaking 300th Grand Prix from fifth place after his late surge also produced a leap in places. The veteran, with a time of 1:55.899 on his GSV-R, was ahead of fellow Italian Andrea Dovizioso (Repsol Honda). His team-mate Dani Pedrosa – who had struggled to find his pace during free practice – managed to step his level up as he posted a time of 1:55.990 to take seventh spot.