Power: Three in a row possible after pole

Power: Three in a row possible after pole 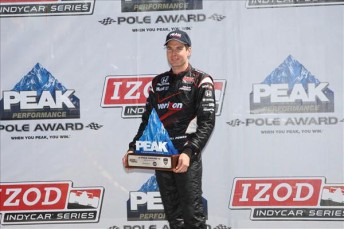 Will Power says that winning a record-breaking three races-in-a-row is possible after scoring pole at Barber Motorsports Park for Round 3 of the IZOD IndyCar Series.

The series points leader won his second consecutive PEAK Performance Pole Award with a quick lap of 1:10.1356s ahead of the inaugural Indy Grand Prix of Alabama.

Power, driver of the #12 Verizon Team Penske car, will attempt to be the first in IZOD IndyCar Series history to win the first three races of the season.

While his Penske team-mate and fellow Australian Ryan Briscoe will start in ninth place, Queenslander Power said that his focus has to remain firmly on a race with no mistakes.

“I just have to keep executing in the races,” he said.

“If we can stay up front and win tomorrow that would be great, but if we aren’t in the position to do that, I just can’t make mistakes. We knew we needed to qualify in the front because it is difficult to get past anyone. We are going to rely on strategy tomorrow with the tyres. We expect a good crowd and hopefully a good race.

“I think three wins a row is possible, but pretty tough to do. Regardless, we are heading in the right direction.”

Mike Conway will make his first front-row start, posting a quick lap of 1:10.6501s in the #24 Dreyer & Reinbold Racing car. His previous best was sixth in back-to-back races at Watkins Glen and Toronto last year.

The Indy Grand Prix of Alabama will run in the early hours of Monday morning (Australian time). See Power talk about his pole in the video below.