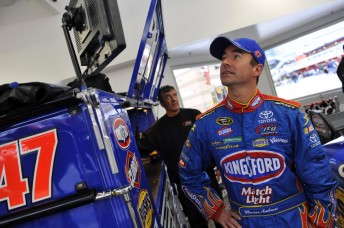 Aussie ace Marcos Ambrose has scored his best qualifying performance for the season by qualifying in fourth place at Phoenix International Raceway in Avondale today.

Ambrose will start from the outside of the second row for tomorrow’s Subway Fresh Fit 600 in top four filled by recent NASCAR converts.

Ambrose admitted that he was surprised with his qualifying form at the odd-shaped one-mile oval after being 28th and 32nd fastest in the two practice sessions held earlier in the day.

“It was great, a real bonus for us,” said Ambrose.

“We didn’t expect to run that good. We feel good about it and we have a great race car. We had good practice speeds.

“We were worried about qualifying and to come out like we did and put a good lap down, we’re really proud of it.”