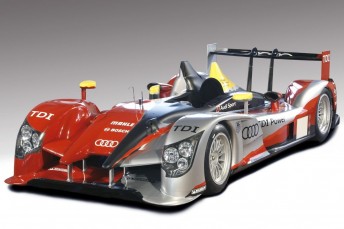 The new Audi R15 plus debuts this weekend at Paul Richard

Audi’s new ‘R15 plus’ will face off against Peugeot’s reigning Le Mans 24 Hour winning Peugeot 908 HDI for the first time this weekend in the opening round of the Le Mans Series at Paul Ricard.

The new car will be driven in the Le Castellet 8 Hour by Audi’s star trio of Allan McNish, Rinaldo Capello and Tom Kristensen – emphasising the importance of the race to the German marque. (Kristensen will miss this round, however).

According to Audi, the new car features heavily revised aerodynamic and cooling packages, as well as engine modifications brought about by new rules designed to slow the diesel powered cars.

“The race at Le Castellet comes at a very early point in time for us and is nothing but a test in racing conditions,” he said.

“Even though it’s a difficult logistical undertaking, we wanted to gather experiences with the R15 plus at a race as early as possible. Le Castellet offers the opportunity to do this.

“Racing conditions simply can’t be simulated in normal track tests; that’s why we’re contesting a race at such an early stage.”

While the factory Peugeot Sport team will not compete at Paul Ricard, French outfit Team Oreca will campaign a customer 908 HDI for Olivier Panis, Nicolas Lapierre, and Stephane Sarrizan. This car will be run alongside their own prototype, the Oreca-AIM, which topped the official pre-event test.

Also expected to challenge Audi are the Lola Aston Martins from Aston Martin Racing and French privateers Signature Plus, while Rebellion Racing may also contend with their pair of Lolas.

Other notable entrants include Nigel Mansell driving with his sons Greg and Leo in a Ginetta-Zytek LMP1, and former Grand Prix winners Giancarlo Fisichella and Jean Alesi teaming up for their LMS debuts in a Ferrari 430 GT2.

The Formula 3 Euro Series also kicks off this weekend at Paul Ricard, with a disappointing field of just 13 cars expected to be led by Williams test driver Valtteri Bottas, and 2009 Macau Grand Prix winner Edoardo Mortara. The series has been hit hard by the advent of GP3, with Carlin Motorsport and Manor Motorsport both moving to the new championship.