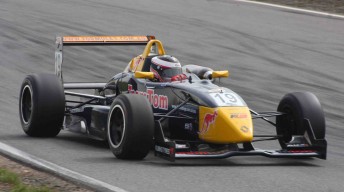 Tom Tweedie pulled a quick time out of the bag this afternoon to top the F3 Australian Drivers Championship time sheets, as the opening day of practice for the second round of the Shannons Nationals Motor Racing Championships concluded at Symmons Plains.

Tweedie, driving an older 2004 model car is desperate to impress potential backers this weekend while championship leaders Mitch Evans and Ben Crighton are missing in action, but he concedes that it will be hard work to stay at the pointy end of the field.

“I think the racing this weekend will be very close at the front, and the slipstream will be very important on the long straights,” Tweedie said.

“Anyone who can gain a one-tenth of a second advantage will be looking good, it’s that close.

“Even though it’s our first time at Symmons Plains, we knew that the ’04 car would be quick here compared to the ’07 car, and after trying a lot of different things with the car set-up over the sessions, it seems to be paying off.

“The weather for the weekend should be fine which will be a very good thing for the racing. I just hope we can back up the quick times in qualifying tomorrow.”

New Zealand debutant Andrew Waite was the quickest in the opening pair of sessions, and will be one to watch as the weekend progresses.

In the Australian Manufacturers Championship, West Australian Stuart Kostera set the track alight in his Mitsubishi Lancer Evo 10, topping the time sheets in all three sessions.

Kostera’s New Zealand team-mate Inky Tulloch was spectacular as he pushed his similar machine around the circuit in quick times, with the Subaru WRX Sti of Tasmanian Sam Walter and Queenslander Kurt Wimmer hot on his heels.

The Porsche GT3 Cup Challenge presented by Mission Foods as well as the Shannons V8 Touring Cars were also on the track today.

The Shannons Nationals also doubles as the 50th anniversary of competition at Symmons Plains, with static displays, special on-track activities and parades including some of the machinery that has raced at the venue in the last five decades.

Highlights include the F3 Superprix presented by Elf Lubricants, the 40 lap feature race for the GT3 Cup Challenge on Sunday, and a pair of one-hour long mini-enduros for the V8 Touring cars.

On track action kicks off at 9:30am, with Saturday admission $10 per person, and patrons under the age of 16 admitted for free.