Top Fuel points chase to heat up at Willowbank

Top Fuel points chase to heat up at Willowbank 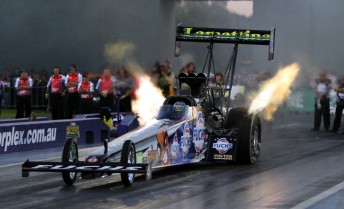 The chase for the ANDRA Pro Series Championship in the Top Fuel category will heat up in the ENZED Australian Top Fuel Championships at the Willowbank Raceway at Ipswich, Queensland next weekend.

While the will host over 260 racers across the two-day event much of these focus will be on the leading trio in the 8000hp flame-throwing Top Fuel category with defending champion Phil Lamattina, three-time champion Phil Read and Martin Stamatis set to provide plenty of thrills.

Reigning champion Lamattina said he was excited at the way the 2009/2010 season was shaping up.

“The way the points are at the moment, to be leading at this stage, is very exciting,” said Lamattina.

“We are a little bit more in the box seat also, as we are in the exact same position in the championship that we were at this time last year – leading with three rounds to go – and now we know what we need to do aboard the Fuchs Top Fuel dragster to win.”

Stamatis, team-mate of Read, broke through for a win in Perth in December and with solid performances across the season is currently just 15 points behind the Victorian in second place.

“We are looking forward to heading to Willowbank Raceway after Sydney’s rain-out, it has been months since we have laid down a run in anger and with Willowbank always immaculately prepared and ready for these Top Fuelers we can’t wait to get out there,” said Stamatis.