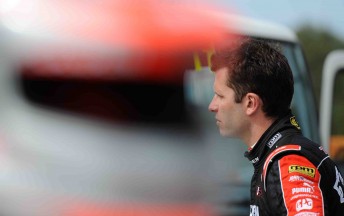 Garth Tander at the Australian Grand Prix recently. The Toll HRT driver won two of the three races there

Tander, the 2007 V8 Supercars champion, will head to Winton with Percat in two weeks to oversee Percat’s test day with his Jay Motorsports team. The plan is for Tander to steer a handful of laps to get an understanding of the Commodore VZ before guiding Percat from the sidelines.

“We’re going to go down and give him a bit of a hand,” Tander confirmed to Speedcafe.com.au.

“From Nick’s point of view, he doesn’t really know what he needs from a V8 Supercar, because he’s basically got no V8 experience. 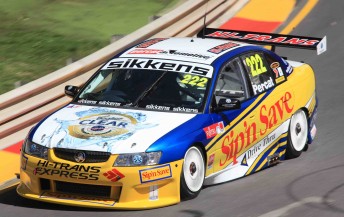 “It’s a two-fold thing. One, it’s to make sure the car is where it needs to be. Nick doesn’t have the knowledge to guide the team in the direction they need to go, and two, it’s for me to help Nick look for the speed in the right areas. Getting speed out of a V8 Supercar is very different to getting speed out of a Formula Ford, which Nick has a lot of experience at.

“It looks like he’s only going to have a limited Fujitsu V8 program this year, so it’s just making sure that he doesn’t spend all of his races getting up to speed. Hopefully we can fast-track that a little bit.”

While Tander will get some laps inside the #222 car, he says the test is not all about him getting track time.

“The test isn’t about me going out there and me driving his car and doing 100 laps,” he said.

“That’s not going to help anyone. I’ve done enough laps in a V8 Supercar to know what’s good and bad. I’ll be able to let them know within five laps what’s going on with the car. That will really be the extent of my driving.”

Percat, who currently sits fifth after his debut round at the Clipsal 500, says that Tander’s presence will be a huge coup for his test day.

“It’s about helping me, telling me where I’m at and getting him to make the whole package faster,” he said.

“It’s a good thing to stick him in the car for a little bit to see where it’s at. Hopefully that will help us get it a bit closer to the window for Queensland Raceway.

“I think it’s going to help every aspect of my driving. He’ll understand more of the car in four laps than what I will be able to do in half a day. It will give me more of an idea about the whole deal.”

While Percat, a Walkinshaw Racing contracted driver, is sure to get a big benefit from Tander’s help at the test, his days in the Fujitsu Series are not guaranteed. At this stage, his budget is limited to the first two rounds of the series and is still chipping away at finding more support for the remaining rounds.

The next round of the Fujitsu V8 Supercars Series will be held on April 30-May 2 at Queensland Raceway.