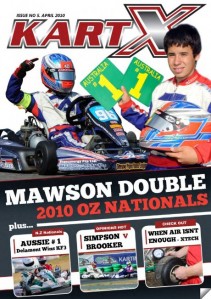 Last weekend’s national championships saw some of the closest racing in the history of the sport. And if you don’t believe that, check out these figures.

Yep, it was a close run thing!

Other features inside Kart X include coverage from the 2010 New Zealand National Karting Championships, the Rotax World Final, dirt karts and technical features.

Kart X is a free online magazine, featuring karting from Australia and around the world. CLICK HERE to view the last edition …