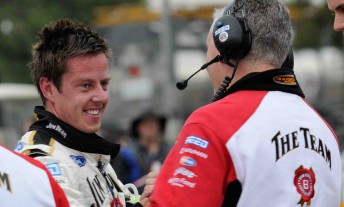 James Courtney’s best-ever start to a V8 Supercars Championship Series has grabbed the attention of the bookmakers ahead of next weekend’s round on the streets of Hamilton New Zealand.

Courtney said that his great start to the 2010 season and past form on street circuit (including wins at Townsville and Sydney last year) might be the reason behind his improved odds.

“Jamie is still the favourite, but my trackwork and form is pretty good on street circuits like Hamilton,” Courtney said.

“And unlike the Melbourne Cup they won’t be giving me a handicap with extra weight just because I’ve had a run of good results!” Is Courtney worth a punt? In the non-championship event at Albert Park recently, Courtney became the first Ford to win a race this year, and judging by his prior street credentials, he might be worth a flutter …

“This is the best start to a season I’ve had since coming into V8 Supercars fulltime (2006), plus I’m coming off a race win and some podiums so things are looking good,” said Courtney, currently third in the championship.

“I’ve been on the podium at Hamilton the last two years we’ve been there (2008 and 2009). My car is quick, and so long as I can keep it off the walls next week I expect to be competitive.

“This is my second year with the team and our second season with this car (Triple Eight Engineering-built FG Falcon) so everything is more settled.

“We are getting more things right more often in terms of performance, strategy, and all the other bits and pieces you need to battle the big teams. Things are also progressing well with our engine development and getting better fuel economy.

“Last year we were quick at many tracks, but sometimes I made a mistake, or we had a problem with the car – like in Townsville when I led race one and the engine failed, or the first race in Sydney when the door started opening and closing.”

Track time starts next Friday at Hamilton with practice, followed by qualifying and racing on Saturday and Sunday.