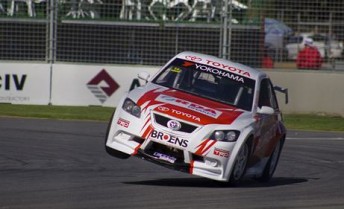 Jack Perkins with return to the Aussie Racing Cars Super Series this weekend at Darwin’s Hidden Valley Raceway for the second round of the series.

After an impressive debut drive in the #14 Toyota Aussie Racing Car at the Clipsal 500 street circuit where he passed an astonishing 22 cars in Race 2 to finish fifth (plus two third places in Races 3 and 4), Perkins currently lies seventh in the series points and wants to make further progress.

“I’m delighted to be heading up to Darwin for the next Aussie Racing Cars round. I really enjoyed my first run in the cars at Clipsal and the racing is just awesome,” he said.

“I really need to thank Phil Ward and the whole Aussie Racing Cars Series for the opportunity to race the #14 Toyota again, and I’m looking forward to getting back behind the wheel.

“Darwin is a great place to be, I really enjoy the town and the track is also very good. It will be hard to wipe the smile off my face this weekend!”

The second round of the Aussie Racing Cars Super Series will be held in conjunction with the Australian Superbike Championship.

Following the Darwin Aussie Racing Cars, Perkins will compete in the second round of the Fujitsu V8 Supercars Series at Queensland Raceway (April 30-May 2). CLICK HERE for more on his return to V8s …