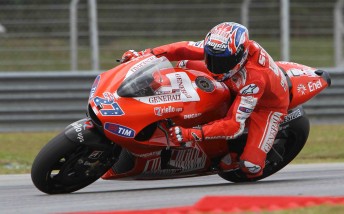 Casey Stoner on his Ducati during testing at Sepang

Casey Stoner has declared himself happy with his Ducati package heading into the opening MotoGP race of the season in Qatar this weekend.

The Australian will start as the favourite for the race, having won the last three Grands Prix held on the Losail circuit – meaning he is undefeated at the track on a Ducati.

“Ducati have come up with a much more manageable engine for this season,” said Stoner, referring to the GP10’s new ‘big-bang’ firing order motor.

“It is easier for everybody to understand and from my point of view I am finding it easier to ride fast on used tyres. We have made progress with the set-up ever since the first test at Sepang and we’re happy with what we have going into the first race.

“We have always enjoyed great results in Qatar although the track isn’t one of my favourites as a rider. I will give my maximum as always but it is only the first race of a very long season that will only start to take shape from the third or fourth round.”

Rossi also enters the season with confidence, having dominated the earlier pair of two-day tests in Malaysia and Spain.

“We have only had six days on track so we still have work to do and things to learn about the new bike,” he said, “but we are starting in good shape. I expect this season to be a big battle with many riders very strong, and I hope that we will show some good racing to the fans.

“Qatar hasn’t been one of the best tracks for our bike in the last few years but at the test we went well so I hope this will continue again for the race.”

Meanwhile, Rossi’s Fiat Yamaha team-mate Jorge Lorenzo is still recovering from a hand injury incurred during pre-season training, while Repsol Honda star Dani Pedrosa has struggled in testing, failing to adapt to the Ohlins suspension on his new bike.

Also at Qatar, veteran Suzuki rider Loris Capirossi will make his 300th premier class start, reigning World Superbike Champion Ben Spies will begin his first full-season in MotoGP aboard a Tech3 Yamaha, and an incredible five riders step up from the (now defunct) 250cc class for the first time.