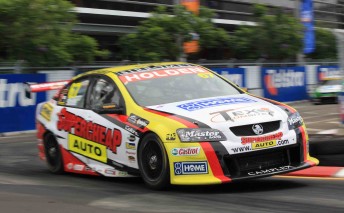 Jack Perkins will make his return to the Fujitsu V8 Supercar Series in the next round at Queensland Raceway with support from Supercheap Auto.

The second-generation driver has secured a one-off deal to drive the James Rosenberg-owned Commodore VE that Tim Slade raced in the Championship Series last year with Paul Morris Motorsport.

Perkins will drive the car in identical Supercheap Auto livery to what Slade raced in last year. The car will be prepared by Perkins himself, competing under #78 with minor support from his long-time personal sponsor AccuChek. 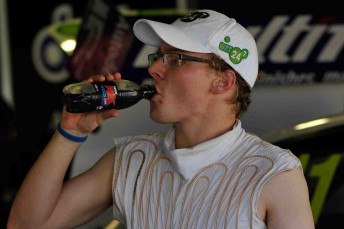 Rosenberg, who owns a V8 Supercars Racing Entitlements Contract that enters Slade in a Stone Brothers Racing-prepared Falcon FG, has the Commodore for sale at the moment and is hoping that a solid showing by Perkins at Queensland Raceway could lead to the car’s sale.

It will be Perkins’ first V8 race in a non-Perkins Engineering-built race car.

“Since Homebush last year, I haven’t really driven a V8 Supercar, so I’m looking forward to it,” he told Speedcafe.com.au.

“I’ve put together a pretty good package with James to use his car. I’m going to run it myself under my own banner, preparing it and having a skid.

“It’s a PMM-built car, but those guys are focusing on the Main Series stuff with the Castrol and Supercheap cars, so for myself, I’ve got my own crew, and I enjoy preparing my own cars. I’ve done it plenty of times before. In the last couple of rounds of the Fujitsu Series in 2008, I prepared my car myself and we actually won the last round of the series. That gives me some confidence that I know the car is going to be sound.

“And I’ve never raced anything other than a Perkins-built car, so it should be good. I’m looking forward to driving it.”

At this stage, his entry is a one-off, but if the right deal can come together (and the car doesn’t get sold), Perkins may get another chance in the car in the third round of the Fujitsu Series at Winton.

“I’d love to do more, but it’s just a matter of making ends meet up from a commercial point of view,” he said.

“This was a better opportunity to run the car myself from a costing point of view. Obviously I have some support from Supercheap Auto, plus my own loyal supporters like AccuChek. We’ll definitely do Queensland, and hopefully we’ll have a good run and I can look to Winton.

“But James owns the car, and it’s for sale, so the idea is to see if we can sell it.”

Perkins is yet to lock in an endurance drive at Phillip Island and Bathurst, although this opportunity in Rosenberg’s car hints towards Perkins partnering up with Slade in the Wilson Security Racing Falcon FG.

But before Queensland Raceway or the endurance races, Perkins is to decide in the next 24 hours if he will compete in the second round of the Aussie Racing Cars Series at Darwin this weekend. Perkins works full-time for Paul Morris Motorsport and is currently weighing up whether he can squeeze in the Top End round this weekend while the PMM team prepares for the Hamilton V8 Supercar round.