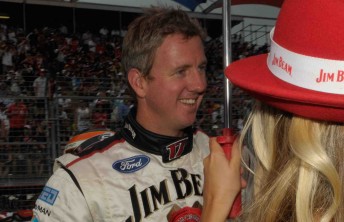 The #17 Jim Beam Racing driver will become just the 13th driver in history to achieve the feat. After making his debut back in 1994 at Oran Park, Johnson contested a number of one-off rounds before securing his first full-time drive in 2000 with Dick Johnson Racing.

In that time, he has notched up 337 race starts, three wins, two poles, and 11 podiums. Steven Johnson's first V8 Supercars round win on the streets of Canberra in 2001 (Pic: Courtesy of www.djr.com.au)

While admitting that 150 is a significant number, Johnson, 35, downplays the achievement.

“I haven’t thought about it too much but I’m pretty pleased to have been around for so long.

“I look at photos of the cars from the last 10 years and I’m amazed at how far the category has come. The standard of competition is so high these days that you have to work harder than ever for results, which makes it all the more satisfying when you have a good finish.”

‘Stevie J’ has contested almost all of his racing with his family team (besides selected drives with Alcair Racing and Racing For Life teams in the late 90s). Remaining loyal to his famous family brand is something that he is proud of.

“Family is everything to me, so to have worked with Dad for so long and to still have such a great relationship is the most important thing. He’s not just my father; he’s my mentor and my mate,” he said.

“We have improved so much over the last year and a half. I’m really loving the intensity and the competition with (team-mate) James Courtney. I think it has brought out the best in me and as a result, I’m driving better than ever before.”

Johnson, currently 10th in the V8 Championship Series after six races, is looking forward to next weekend’s Hamilton round.

“We have a good record there. Last year we were 1-2 on the grid and scored two podiums,” he said.

“While I was bit disappointed with my overall Adelaide results, we were happy with the car. And we sacrificed some speed at the AGP to try out a few new things for Hamilton.

“We always give everything, but at the moment we are thinking about the big picture, rather than one race at a time. That said, it would be great to celebrate my 150 with a win.”