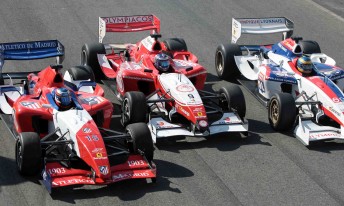 Queenslander John Martin kicked off his 2010 Superleague Formula campaign in fine style a podium result at Silverstone on the weekend.

The former Australian Formula Ford champion, driving for the Atlético de Madrid team, finished 10th in Race 1 and followed it up with third in Race 2.

The cash wasn’t to be Martin’s, though. After a clash with a rival in Race 2, the steering on Martin’s car was not straight and he was forced to drive slightly handicapped for the dash.

“Unfortunately there wasn’t time to flat patch the car before the Super Final to get the steering right so we went into it with the car like that,” he said.

“That was a definite disadvantage which was a shame, but that is the way it goes.”

“It is really good to walk away sixth in the championship after Round 1,” said Martin.

“Last year we were playing catch up the whole time. I didn’t finish the first two races in 2009 (at Magny Cours) and left there with 13 points and about 18th in the championship. I picked up more points than that in Race 1 here this weekend, then the podium in Race 2 and another point in the Super Final.”

The next round of the championship heads to Assen on May 15/16.