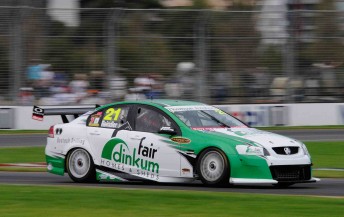 When BJR switched from Fords to Holdens in 2008, the Albury-based team used Walkinshaw Racing-built engines, but this year, the team elected to go down a different path with Jamie Noonan’s engine program. Noonan has worked for and supplied a variety of V8 Supercars teams in the past, but is only contracted to supply BJR this year.

With time and resources up their sleeves, BJR and Noonan installed the third Noonan engine in Reindler’s car after the Clipsal 500.

Team owner Kim Jones told Speedcafe.com.au that after the off-season expansion to three cars, all the pieces are now starting to come into place for his team.

“There’s been a little bit of work to it,” Jones said.

“We would have preferred to have the Noonan engine in there from the word go, but with the Fair Dinkum Shed deal coming together so late, we had to go with Option B, which was the Walkinshaw engine.

“After Clipsal, we had the ability to have the third engine in that car and the spares to be able to run it. There’s still a little bit of work to do and some modifications, but there’s not a great deal to do. It was in there for Albert Park and it seemed to work fine.

“Away we go now – all three of our cars on the same program – and that’s our preferred program. Noonan Engines has done a terrific job to get to where we are now, considering where we started. The engines are faultless, beautiful to look at and they run very, very strongly.”

While the engine supply deal was never intended to be an exclusive arrangement, Jones says that having Noonan’s sole focus on his team has a lot of benefits.

“The main reason why we’ve chosen to go with Noonan is because we’re the sole focus in V8 Supercars for Noonan,” he said.

“Before (with Walkinshaw) we were one of many parties. As a working group, we sat down and decided half way through last year where we wanted to go and some of the things that we wanted to change. One of those things was to run a different engine supply. Jamie (Noonan) and his boys have worked very hard to get us to where we are, and we’re not lacking in the engine department at all. It’s all working very well.”