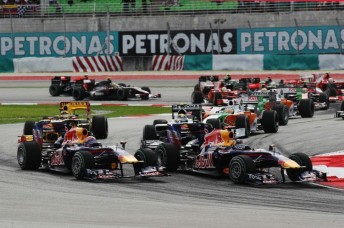 Red Bull Racing has overcome its early-season reliability questions with a solid one-two result at a hot Sepang Circuit in Malaysia.

Vettel secured the win at the start when he launched from position three on the grid to lead by turn two, despite a strong challenge from Webber.

In the end, it was the start, and a slow pit stop from Webber’s crew due to an airgun drama, that guaranteed Vettel his first win for 2010.

“I realised I had a good start and I took the chance I had and just made it,” he said.

“Mark had a better exit (from turn two) bit it is very slippery. We were both trying to push, but we kept the respect. If Mark was in my position, I’m sure he would have done the same. After that, it was about getting away from our competitors.”

Webber got a little bit of wheel spin at the start which allowed Vettel to get down the inside of him at turn one. Ultimately, this was where the race was won, but Webber said the competitive atmosphere in the team is “awesome.”

“The spirit and the chemistry in our team is awesome,” he said.

“He did the job and deserved the victory. The car ran well, obviously, after a tough few races we where. Of course, I’d love to be one spot further up, but for the team, it’s great.”

Behind Rosberg on the podium was another top result for Renault’s Robert Kubica and Force India’s Adrian Sutil.

The Ferraris and McLarens came back into the top 10 after their disastrous qualifying efforts, although Fernando Alonso could not make it to the finish after a engine detonation with two laps remaining. Lewis Hamilton was the best of them, taking eight spots on the first lap to eventually cross the line in sixth place ahead of Felipe Massa and Australian GP winner Jenson Button.

Alguersuari’s team-mate Sebastien Buemi finished 11th and was the only other driver to finish on the lead lap.

Of the retirements, Michael Schumacher was the highest-profile casualty with suspension dramas in his Mercedes.

The next round of the world championship is in China in two weeks time.