Shane Price on the pace at the nationals

Shane Price on the pace at the nationals Shane Price is making a successful return to the karting ranks this weekend. Pic: photowagon.com.au

V8 Supercar driver Shane Price has made a stellar start in his campaign at the 2010 National Sprint Kart Championships by qualifying equal fastest in the Clubman Heavy category in Puckapunyal, Victoria today.

Price, who will compete in this year’s endurance events at Phillip Island and Bathurst with Centaur Racing alongside Tony D’Alberto, set the pace with local driver Zeke Edwards.

The duo circulated the 1064-metre circuit in an identical time of 46.930 seconds, however, Edwards claimed the pole position based on the pairing’s second fastest lap.

“It is the third time I’ve raced at the nationals and after two very disappointing qualifying efforts in 2007 and 2008 I’m delighted to finish up on pole today,” said Edwards.

“It is the first time that I have qualified fastest at a major event and to do it in such a high quality field is a great feeling.

“The focus now is on putting three solid heat races together and being able to be up the front when it matters most on Sunday afternoon.” 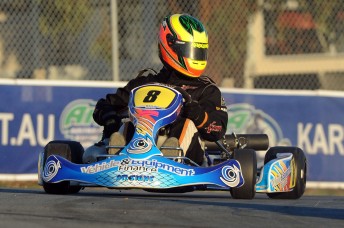 Competing in his first national championship event aboard a kart since 2004, Price is delighted to qualify at the front in such a high quality field.

“Coming into the event I set myself a goal of qualifying inside the top ten, so I’m over the moon to finish up where I did today,” said Price.

“When you look at the depth of the field there are some very talented, and well credentialed, drivers in there so you’ve not only got to have pace but also some luck on your side – even in qualifying.

“It was an awesome effort by Zeke to qualify on pole and it’s great to have an all Arrow front row.”

2008 Champion Shayne Piper was third fastest ahead of Jason Hryniuk and Doyles Racing’s Brendan Nelson. Defending champion Matthew Wall could only manage the 18th fastest time in the 44-kart field.

Simon Hodge was the surprise packet in the fastest junior category, Junior Clubman.

The South Australian teenager set the pace in both qualifying sessions aboard his Arrow kart to finish narrowly ahead of Sam Lumsden and Gold Coast pilot Lucas Ward. The second and third fastest runner were separated by one one-thousandth of a second.