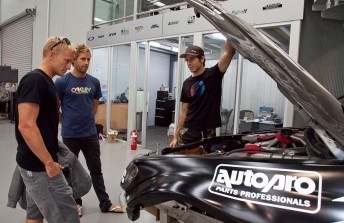 Rick Kelly has taken up surfing and with the world’s best in town for this weekend’s Rip Curl Pro at Bells Beach in Victoria, the Jack Daniel’s Racing driver has drafted in two very handy coaches.

Kelly went for a surf with World #17 Tom Whitaker and World #33 Adam Melling at Gunnamatta Beach this week in a day organised by Oakley, personal sponsor of all three athletes.

Kelly said that he was urged to take up the sport as a result of constant requests to ‘go for a paddle’ from mates and personal sponsors such as Oakley and Red Bull.

“I’ve got some great personal sponsors and mates that are all involved in surfing. I’ve been asked to go for a surf that many times I thought it was about time I stepped up,” said Kelly. Who better to help out than Whitaker and Melling, with both world top 50 surfers taking a look around Kelly Racing’s Braeside headquarters before the trio hit the surf.

Whitaker and Melling were impressed with Kelly’s ability given it was just his second time on a surfboard. Kelly is an accomplished wakeboarder and champion water ski racer.

While the two Aussies will be out to claim the prestigious Rip Curl Pro at Bells this weekend, Rick and brother Todd Kelly will be water ski racing in their home town of Mildura over Easter trying to score their third win from three events this season.

You can CLICK HERE for a gallery of images from the boys’ surfing day.