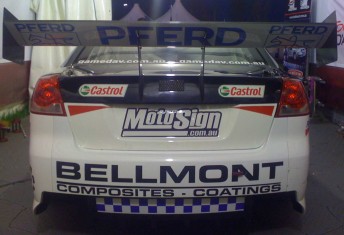 The Tony D’Alberto-driven Commodore VE had Victorian Police ‘blue and white’ chequered stickers on the rear diffuser of the car, signifying Centaur Product’s role with the authority department.

Centaur creates the ‘POD’ on Victorian Police’s new Commodore VE Divisional vans. The Centaur POD is a vehicle accessory development in conjunction with the Victoria Police and Holden, incorporating new engineering and design ideas to improve safety and performance for occupants and officers. 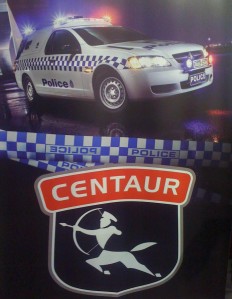 The Victorian Police has ordered 220 of the units to be fitted to the Divisional vans, with 30 vehicles currently fitted out. Centaur is delivering one a day for the next 12 months.

To boost the public’s awareness of the POD’s, D’Alberto now has the Police stripes at the rear of his car, and with the Vic Police expected to promote its new vehicles at the L&H 500 at Phillip Island in September, D’Alberto’s Commodore could be seen in a one-off all-Police livery.

A similar scheme was employed by John Faulkner back in the early 2000s for a one-off round at Winton.

While that is sometime off, team owner Al D’Alberto explained to  Speedcafe.com.au the benefits of the new Divisional vans.

“The Victorian Police are likely to have a presence at Phillip Island race to show its new product – the upgrades on their police vehicles. They’ll have a display there,” he said.

“The PODs have got a lot of safety upgrades for the officers themselves, and it allows them to pursuit vehicle, not just an apprehension vehicle. They’ll be at Phillip Island to draw a bit of attention to the vans. It’s a good news story for the state government of Victoria that they are investing in infrastructure.”