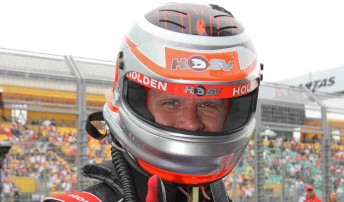 Garth Tander has led a squad of V8 Supercar drivers in warning road users of the pending dangers on Australia’s roads this coming Easter long weekend.

“We really need to push the road safety message, especially given the events of the Grand Prix weekend with what happened to Lewis Hamilton and then Mark Webber’s comments in the paper about having a lot of rules and regulations, and also given how big the road toll is in but Victoria and nationwide,” said Tander.

“Driving on the roads is certainly not a right, it’s a privilege and getting from A to B in the safest possible means is the best way forward – things like not speeding, not talking on your mobile phone, not adjusting your Sat Nav on the run, all that sort of stuff. It’s really using a bit of common sense, especially during Easter when there are so many more road users.”

Tander also suggested the coming L&H 500 will provide a new spectacle for V8 Supercars fans, with the new co-driver format giving a new spice to one of his favourite events.

“It’s going to be a different type of race this year because it’s the first endurance race both regular drivers can’t team up in the same car, so all the new driving combinations are going to make it an interesting 500km.

“Given that Toll Holden Racing Team has won the past two L&H 500 races and I’ve been part of that, it’s a special event and Phillip Island is a very special place for me having won the Championship here in 2007, having won the past two L&H 500s and I even had my first V8 Supercar start at Phillip Island, so it’s a place I really enjoy driving at.”