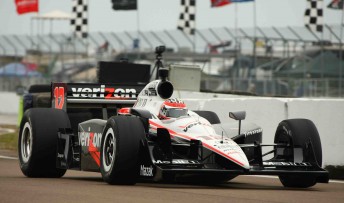 Will Power held off Justin Wilson by 0.8244s to win the rain-delayed Honda Grand Prix of St. Petersburg this morning (Australian time) to keep intact his perfect run in the 2010 IZOD IndyCar Series.

Power earned the third victory of his IZOD IndyCar Series career, following his victory in the first round of the championship at Brazil. The last driver to win two in a row to start a season was Sam Hornish Jr. in 2001, at Phoenix and Homestead.

It was a great day for the Australian Team Penske duo, with Ryan Briscoe taking third place. The Sydney driver came from 19th on the grid to take the podium spot.

But the day was all about Power, who has set up a sensational start to the season.

“It’s just great. It’s Verizon’s first year, and we’re out to win the championship,” he said.

“Perfect pit stop, good race. Perfect weekend – pole and a win. Can’t get much better than that.”

The sixth Honda Grand Prix of St. Petersburg was postponed 18 hours because of more than four inches of rain that overwhelmed the temporary street circuit March 28 and, in conjunction with lightning, created unsafe conditions for race participants and ticket holders.

Power took the lead on Lap 73 of the 100-lap race when E.J. Viso slowed with a gearbox problem and then resisted Wilson’s No. 22 Team Z-Line Designs/DRR car to the checkered flag.

There were an event-record 10 lead changes among eight drivers in the race that started on dry tyres due to a rapidly drying track.

Power led a field-high 50 laps in the No. 12 entry to pick up the three bonus points (one for the pole, two for most laps led) and takes a 44-point advantage over Wilson, Ryan Hunter-Reay (finished 11th in the No. 37 IZOD car for Andretti Autosport) and Dario Franchitti heading to two more road/street course events before the first oval race.

Franchitti, the reigning IZOD IndyCar Series champion, jumped from 11th in the final 11 laps to finish fifth, while Alex Tagliani gave start-up team FAZZT Race team its best finish of sixth and his personal best in the series.

Danica Patrick scored her best road/street course finish of seventh since Long Beach (fourth) in ’09. Raphael Matos checked in at eighth and Graham Rahal advanced from the 16th starting spot to ninth in the No. 67 Dollar General car for Sarah Fisher Racing.