Looking back at the 2007 Nationals

Looking back at the 2007 Nationals

At three days out from the 2010 National Sprint Kart Championships at the Hume International Raceway in Puckapunyal, Victoria it is time to focus on the Nationals of three years ago – the 2007 Championships held at Sydney’s Eastern Creek International Karting Raceway. 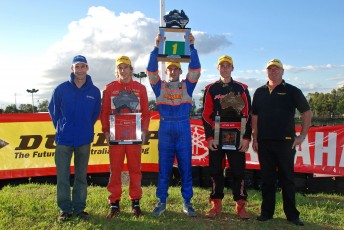 Victorian James Sera secured his maiden Australian Karting title at this event while Chaz Mostert won his third national crown in as many years.

Sera defeated the best young drivers from across the country in the prestigious Clubman Light category. After coming close to securing the crown on numerous occasions the karting veteran claimed his first crown ahead of fellow Victorian Matthew Hayes.

“After many years of trying it was great to finally break through for the win. I led almost the entire final of the 2006 championships, only to lose the lead on the final lap which made this year’s victory even sweeter,” said Sera.

In Clubman Heavy, Troy Hunt took an emotional victory while claiming the six national crown of his illustrious career.

“It was probably the most effort that I’d put in to a campaign in the nationals for many years, so it was a huge relief when it all came together in front of my family, friends and a lot of other people who have helped me throughout my career,” said Hunt.

“When he slid wide exiting turn two I grabbed the opportunity and took over the lead. There was no way I was going to give it up from there.” 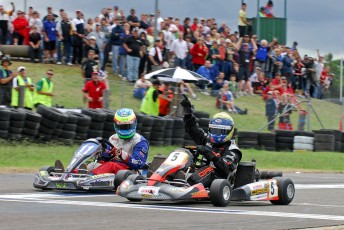 Hryniuk finished second ahead of Lee Mitchener, who continued his run of close calls in state and national championships with his podium finish.

In the battle for the Junior honours, Mostert won his third Australian Championship in as many years when he crossed the line first in the Junior Clubman class. Mostert took the win by less than a kart-length ahead of Western Australian driver Amrit Kandola and David Whitmore.