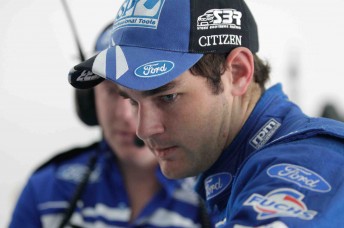 The SP Tools driver, who finished second overall at the non-championship meeting at Albert Park, has emerged as the star of this year’s championship, proving that his promised speed can be regularly converted into podium results.

While he is yet to achieve a win in the tough V8 category, van Gisbergen is high on the list of a number of team’s wish list for next year, with his current three-year contract at Stone Brothers Racing coming to an end at the conclusion of this season.

Speedcafe.com.au understands that strong interest has been shown from both Ford and Holden teams, and the fast New Zealander confirmed that he has been approached by a number of outfits about his services. However, he says he is quite happy with his current home at SBR.

“My deal with them runs out at the end of this year, and I don’t know what’s going on there yet – we’ll see,” he said.

“Obviously with things going well for me at the moment, there’s a bit of interest, and it depends on the Ford side of things too. I’m happy at the moment and I’m happy where we are.”

Van Gisbergen, who is part-managed by his father, admits that his results this year have contributed to the increased interest in his future driving position.

“I suppose the results have helped,” he said.

“Dad’s been here this weekend (at Albert Park) and he’s been approached a little bit. But I will say that I’m happy where I am at the moment.”

The 20-year-old sits fourth in the V8 championship but isn’t getting carried away with his fast start to the year, which has included two podiums.

“We are close, but I think we’ll get there eventually – probably mid-year,” he said in regards to getting his first win.

“Sixth overall is still my aim. It’s a long way to predict where you could end up, but if I finish the year strong, I’m happy to build towards next year.”

The next round of the V8 Supercars Championship Series heads to Shane’s home race – Hamilton, NZ – and he thinks more podium results are on the cards.

“I’m looking forward to Hamilton. It’s an awesome track and I reckon it will suit our car and hopefully a podium will be a good chance there,” he said.

“There’s a bit of extra pressure at home too. I always have mates asking for tickets! And there is family there but it’s nice to race in front of the home fans. They really get involved in it.”