Looking back at the 2006 Nationals

Looking back at the 2006 Nationals

At four days out from the 2010 National Sprint Kart Championships at the Hume International Raceway in Puckapunyal, Victoria it is time to focus on the Nationals of four years ago – the 2006 Nationals held at the Bolivar Raceway just north of Adelaide in South Australia. 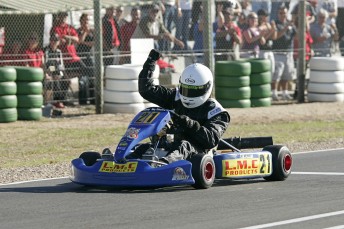 Mason Merritt crossing the line for victory in Clubman Light at the 2006 Nationals. Pic: Paul Carruthers

Just when it seemed as though James Sera was finally going to break through and win a national title, along comes South Australian Mason Merritt to steal the show.

After being a front runner at the past few national championships, even coming within 100 metres of victory in 2004, this year looked as though it was finally going to be Sera’s year.

The Victorian got the lead at the start of the final but he was unable to break away from Merritt in his Omega kart. The pair raced nose to tail for the entire final and with three corners remaining Merritt pounced for the lead – much to the delight of the large parochial crowd in attendance.

“It was really a battle between myself and James all weekend, he won the first heat and then I won the rest of the races but there was nothing in it every time,” said Merritt.

“I remember going into the final lap thinking that it was now or never, you only get one opportunity to win a national championship on your home track.

“When James covered his line at the end of the back straight, I knew it was my chance and I went out wide to get a run on him for the exit of the corner.

“I had a look behind me entering the second to last corner and saw that I had a couple of kart lengths lead. I knew from there that the title was mine if I could just stay on the track.

“It was an unreal feeling when I crossed the line, it is hard to describe.”

After having to wait six months before he was classified as the winner in 2005, this year was a different story for Grant Smith in Junior Clubman crossing the line first ahead of Scott Pye and Leigh Nicoloau.

In Formula 100, Matthew Wall had some luck on his side for once at a national championship. After suffering from a number of incidents while in winning positions throughout the years, the shoe was on the other foot for the likeable Victorian at the 2006 Nationals.

Entering the final corner Wall was placed third behind Barclay Holden and Glenn Powles but when the leading duo came together it allowed Wall to power his way to the win. He made it two wins at the same event when he claimed the win in Leopard Light to become the first National Champion in the category.

After many years of trying Adam Klunyk finally broke through for his maiden national championship in Senior National Light on the track he started his career at. Shortly after this event, he announced his retirement from racing.