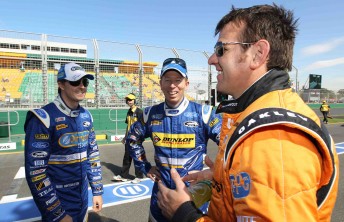 Bragging rights for which driver can have the most Twitter followers is on, with almost half the field now posting latest status updates and photos on the popular social networking site.

Trading Post Racing’s Jason Bright currently leads the V8 Twitter Followers Championship, and today, he launched his new website that he hopes will keep him ahead of the rest of the field.

“It’s becoming a bit competitive between the drivers,” said Brighty, referring to the number of ‘followers’ and ‘friends’ different teams have.

“I’m doing pretty well at the moment but I think this website is going to boost that even more!”

Orrcon Steel FPR’s Mark Winterbottom (@mwinterbottom) is third on 1349 from Toll HRT’s Garth Tander (@garthtander) who is in the mix with 855. Tander’s Walkinshaw Racing stablemates are close behind with Fabian Coulthard (@fabiancoulthard) on 783 and Will Davison (@willdavison22) on 724.

Australian F1 driver Mark Webber (@aussiegrit) has 13,605 followers, while they all pale into insignificance compared to NASCAR driver Juan Pablo Montoya (@jpmontoya), who has 135, 549 followers …

And for the record, @speedcafe is currently holding its own on 623 followers!