Saldana has surgery on broken hand

Saldana has surgery on broken hand 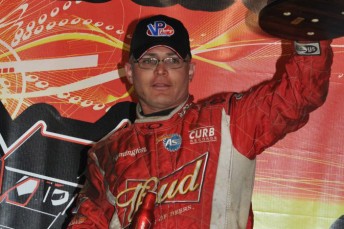 Joey Saldana has had successful surgery to assist with his recovery from a broken left hand sustained during a very hard crash at Volunteer Speedway last weekend.

The Kasey Kahne Racing World of Outlaws driver was caught up in a chain reaction accident early in the main event on Saturday night resulting in him crashing out of the race.

Surgeons in Indianapolis yesterday inserted 10 screws and a plate in Saldana’s left hand to help him regain full motion. With a two week gap in the World of Outlaws schedule Saldana hopes to begin rehabilitation next week and expects to compete in the World of Outlaws next scheduled event on Saturday, April 10 at Tri-State Speedway in Pocola, Oklahoma.

Saldana, who was victorious last weekend in the opener of Kasey’s King of Bulls Gap Presented By Budweiser at Volunteer Speedway, is currently third in the World of Outlaws championship standings, just 20 points behind leader Jason Meyers and 15 behind Steve Kinser who is currently second.

The Indiana native was the winningest driver in last year’s series with 20 A-Main victories to his name, eight more than the eventual champion Donny Schatz.