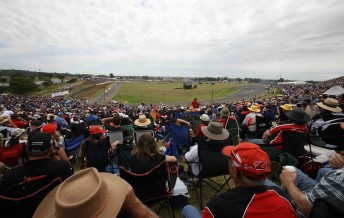 Oran Park Raceway said goodbye to the V8 Supercars in 2008

Hundreds of Sydneysiders have been camping out at the legendary Oran Park south-west of Sydney!

No it’s not for once-in-a-lifetime motor sports event. Yesterday, massive queues of people have been lining up for the release of house and land packages on the former car racing venue.

Its seems ironic that a venue that displayed the very latest motor sports technology is now being billed as at the cutting edge of urban development.

“They will also be fitted with high speed fibre optic cable to allow people to live and work from home.

“This key milestone in the South West Growth Centre is being delivered as a result of a good working relationship between landowners, the NSW Government and Camden Council.”

Those land owners include the Perich family which owned and operated the motor sports facility through it. Built in 1962 by the Singer Car Club, Oran Park went on to host a wide range of motor sports events from touring cars, motorcycles, dragsters, trucks and karting.

In total the 1,119 hectare development project will include 7,540 new homes for 22,000 residents, all within a maximum 400 metres of a bus stop and five schools. Oran Park Town will also include 36 kilometres of walking and cycling paths; and more than 10 per cent of the development will be dedicated to open space.

The final V8 Supercar Championship round was held as the Grand Finale in 2008. It was also the final fulltime event for Mark Skaife. No word if Skaife was one of those lining-up this morning …