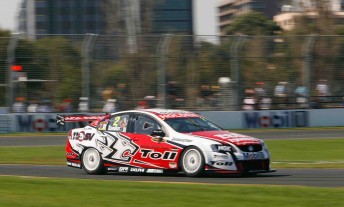 Garth Tander has taken pole for first race of the BRC IMPCO V8 Supercars Challenge at the Albert Park.

The Toll Holden Racing Team driver set a time of 1:57.1666s in the top 10 shoot-out, edging out Jim Beam Racing’s James Courtney, who will start from the second row of the grid.

Tander gave credit to his factory team for the result.

“With the cloud cover, there was a lot of grip, and a lot of rubber. It was a pretty good lap.”

Jack Daniel’s Racing’s Todd and Rick Kelly will both start from the second row, ahead of SP Tools driver Shane van Gisbergen.

TeamVodafone’s Craig Lowndes and Jamie Whincup will line-up sixth and seventh. Whincup was the big loser of the session after a lacklustre lap.

Team BOC’s Jason Richards set the fastest time to the first sector out of any car in the shootout, but he could not replicate that form for the rest of the lap. A slide at turn 15 did not help his cause.

Castrol Racing’s Greg Murphy was the only driver to make a mistake on his lap, spearing of the track at turn one after going into the braking zone too deep. Murphy will start 10th.

“I was pushing a bit hard and locked the rears,” Murphy said.

“The car feels really good, so it’s just disappointing. We want to be up the front, but this is how it goes. It was just the driver pushing.”