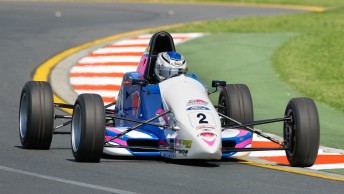 The Sonic Motor Racing driver was able to extract a quick lap early in the session in his Mygale SJ10a. That time stood for almost the entire session, giving him first Australian Formula Ford Championship pole position.

Chaz Mostert was second fastest in his Spectrum, coming agonizingly close to Uhrhane’s time, while Adam Graham was third in his Mygale.

“It was tough to find a clean lap out there, but we were lucky to get some clean air and bag a good lap,” said Uhrhane.

“The car is handling really well and I think we’re going to be really strong in the race, so I have to thank Sonic Motor Racing Services for that.”

Race 1 of the Genuine Ford Parts Australian Formula Ford Championship gets underway at Albert Park at 12:10 (AEDST) on Saturday.

MINI Challenge will see reigning class champion Paul Stokell take his spot at the front of the field ahead of Chris Alajajian, Glenn Seton and Dean Canto.

Seventeen cars have entered MINI Challenge this weekend, a good improvement on the 12 cars that were seen at the Clipsal 500 two weeks ago.

But there’s no number problems for the Formula 5000 Tasman Cup Revival class, with 31 of the great cars competing on the Grand Prix track. Kiwi Steve Ross has taken pole in his McRae GM1 from Chrustopher Hyde is his similar machine.

Australian GT kicks off proceedings tomorrow morning with the first race of the weekend at 11am before the support categories take a backseat with the Formula One cars hitting the track at 12.30pm.