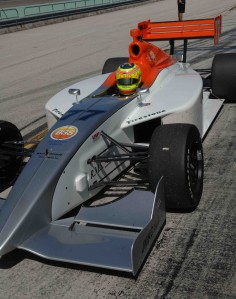 James Winslow has confirmed his spot on the Firestone Indy Lights grid, signing with Sam Schmidt Motorsport for the 2010 season.

After testing with the team at Sebring in early March, a further test at Homestead-Miami Speedway cemented the former Australian F3 Champion’s place in the line-up, and he will now make his competitive debut, carrying the colours of the Bright Side of the Road Foundation, when the 2010 season kicks off on the streets of St Petersburg, in Florida, this weekend.

The move to Indy Lights is the next step on Winslow’s planned route to the IZOD IndyCar Series, following a part-season in the Atlantic Championship in 2009.

“I had the opportunity to race V8 Supercars in Australia this season, but really wanted to make it in open-wheel racing before looking at touring cars,” he said.

“Racing in America last season gave me a taste for US motorsport, and stepping into the Firestone Indy Lights series takes me one step closer to the IRL.

“Joining a team with the pedigree of Sam Schmidt Motorsport should also give me a chance to shine. They have constantly been one of the frontrunners in this series, and our testing performances have shown that we can be as competitive as anyone. I love the Indy Lights car, and the driving style it requires is very similar to the Renault V6 in which I won the title in 2007, which is why I believe I’ll be on the pace.”

Team boss Sam Schmidt excited to have the Brit drive for his team.

“The years that James has had in various levels of European open-wheel racing should make him an instant contender in this series,” Schmidt said.

“He’s proven to be quick across the pond, and he’s showed us he’s quick here in our cars. We’re looking forward to seeing what he can do on the track.”