The start of the 2009 Australian Grand Prix at Albert Park

All eyes will be on Albert Park’s notoriously tricky first turn this weekend as seven drivers start the Australian Grand Prix for the first time.

This is the highest number of debutants since the race moved to the picturesque water-side circuit 14 years ago. 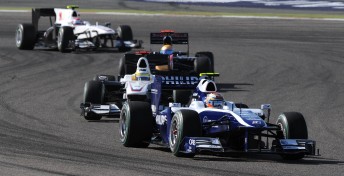 Of these seven drivers, only Senna has raced at Albert Park in any car, having competed in the Australian Formula 3 support events in 2006.

His team-mate Chandhok comes to Australia for the first time with the least amount of Grand Prix experience in the field, having crashed just two laps into his inaugural race in Bahrain.

“But I am a very quick learner. I was able to work on a team’s simulator before the grand prix so that will help my familiarisation a little bit. Finishing the race would be a fantastic achievement we will strive for.”

Hulkenberg is another whose experience of the track is confined to a simulator.

“I spent a few days in the factory last week going through practice runs on the simulator and running through data with my engineers,” says the 2009 GP2 Champion.

“That was really helpful, but nothing beats having time on the track itself.”