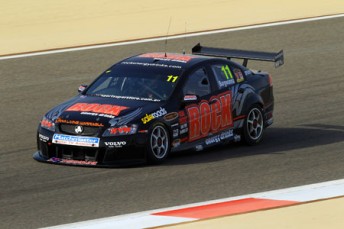 V8 Supercar veteran Jason Bargwanna says that he will take the same approach as usual into this weekend’s non-points races at the Australian Grand Prix in Melbourne this weekend.

The Rock Racing pilot says that for him it will be business as usual as he aims to climb up the order in his first year in the Kelly Racing operation.

“To me it doesn’t matter if there are points or no points, we still try and race for a win and do our very best for Rock Energy Drink and all of our sponsors,” said Bargwanna.

“It’s always a great crowd, a big TV audience and a fantastic event so I’ll be going out there to try my best, have some fun and try to score a good result.”

Bargwanna, who currently sits 21st in the championship standings after six races, is hoping to put an atrocious Clipsal 500 weekend behind him at the fast and flowing Albert Park Grand Prix Circuit this weekend.

Prior to Adelaide, ‘Bargs’ showed potential in the #11 Rock Commodore by running consistently in the top half of the field in the Middle East.

“The Albert Park circuit has quite a smooth surface and it’s quite fast and open,” said Bargwanna.

“Hopefully the positive signs that we showed in the first two events of the year will really shine through here at the Grand Prix.

“I think we can turn it into a good result. Adelaide was a disaster for us so we need to turn it around and get back to being up towards the front.”

In other Bargwanna news, you can catch him as a guest panelist on V8 XTRA this Saturday on the Seven Network at 1:00pm.