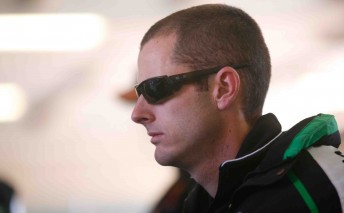 David Wall currently leads the Australian GT Championship after one round

Wall drove with Paul Cruickshank Racing’s Wilson Security-supported team in 2009 with Leanne Tander. The pair finished 18th and 19th at Phillip Island and Bathurst, and Wall told Speedcafe.com.au that he is close to locking down a seat for the 2010 season of endurance.

“We’re getting pretty close, and I think within the next week I’d like to have something locked down,” he said. “At Phillip Island, both Leanne and I were getting back in the groove of things. I hadn’t driven one for a long time, and we were both finding our feet.

“But to come away with a top 20 result at Bathurst in my first effort with no scratches on the car in a very up and down race was good. The race had everything, but we managed to bring the car back with a good result, and hopefully I can get back in something to pick up where I left off and improve on what we did.”

With limited co-driver seats remaining for the endurance race, Wall’s options are slim, however, a possible avenue for him could be at Brad Jones Racing alongside Karl Reindler in the Fair Dinkum Sheds-backed entry. The BJR team offered Speedcafe a firm “no comment” on the issue.

Wall admits that to continue his push towards a full-time V8 Supercars drive, he needs to be involved in the enduros again.

“I’ll be doing GT again there, as we did last year, and hopefully I can secure a ride, keep my name out there and see where it progresses.”