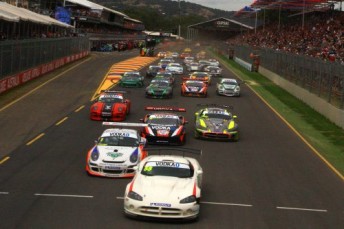 The Vodka O Australian GT field continues to boom, with the introduction of a heap of new cars and new drivers for this weekend’s second round of the championship at Albert Park.

Forty AGT cars have entered the round – the highest-ever field for the Australian GT class.

Former Australian Touring Car champion John Bowe joins the grid for the first time this year, set to pedal the Ascari KZ1 GT3 that is owned by Darren Berry. Berry raced it at the Clipsal 500, but has decided to hand over the driving duties to Bowe for the prestigious race meeting.

Vodka O team driver Dean Grant has taken delivery of what is now the ex-Tony/Klark Quinn yellow Mosler that is undergoing a rapid repaint and livery change to suit Vodka O. Grant has sold his Lamborghini Gallardo GT3 to Simon Middleton who will debut the car on Melbourne’s Grand Prix layout.

After a horror Clipsal 500 round (where he crashed two Moslers), VIP Petfoods Tony Quinn will return to his popular Aston Martin DBRS9.

In other new additions to the driver line-up, Irish international Hector Lester makes another return to the Australian GT grid in his Ferrari 430 GT3, and Nick O’Halloran also comes back, driving his similar model Ferrari. West Australian Ross Zampatti lines up in the Interauto Motorsport Lamborghini Gallardo GT3 while Paul Tresidder (who missed the Adelaide round because of business commitments) will compete in his Porsche GT3 997 Cup Car.

In the Production class, Tim Poulton makes his 2010 debut in his Lotus Exige S after a strong finish in the 2009 season.