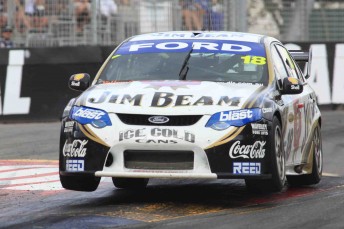 James Courtney en-route to second place at the Clipsal 500

James Courtney will get his first taste of Dick Johnson Racing’s latest engine developments at the non-championship Albert Park street race this weekend.

The Jim Beam Racing driver, currently third in the V8 Supercars Championship Series, was set to use the improved engine package at the Clipsal 500 recently, but an unrelated problem on Friday saw the team switch power plants in the #18 Ford Falcon.

Courtney went on to take a pair of second place results at the Adelaide circuit, but the DJR squad recognised that the new engine, fitted to the sister car of Steve Johnson, proved to have better fuel economy and speed. The new DJR donks are said to have better power and improved fuel economy, which means Courtney will spend less time in the pits in future pit stop races

Courtney told Speedcafe.com.au that he is amped to get his hands on the new and improved engine package.

“Stevie ran a new engine at Clipsal and it was quite strong – a bit stronger than ours and a more economical,” he said.

“I’ll have one at the Australian Grand Prix this weekend, and that will help us along the way as well. There’s all these little things in the pipeline – it’s all coming together well.”

“The #17 used a good amount of fuel less than the #18, so it’s quicker in pit lane because we weren’t putting as much fuel in it. And in doing that, we haven’t sacrificed power or drivability.

“We’re quite happy with what we’ve done. We attempted to use James with the new engine, but we had an unrelated issue. It meant that we had to change it on Friday and he didn’t have the benefit of it on Saturday or Sunday.”

Burgess agrees that the non-points Grand Prix meeting is good opportunity to test the engines back-to-back before the championship resumes at Hamilton, three weeks after the Albert Park race.

“It’s a good opportunity to run the thing in anger, just to make sure we have all the mapping correct and we can analysis the benefits,” he said.

“It will be a good test session for us, but we’ve got to be respectful to the crowd that we’re racing – V8 Supercars has said that we’re there to race, but it’s a good opportunity to try some things in racing conditions.”

While DJR has sourced its chassis from Triple Eight Race Engineering, it has maintained it own engine shop – and Burgess is proud of the teams off-season gains.

“The engine guys really need a wrap on the back. They are doing a fantastic job for us and it has made the pair of them more competitive,” he said.

“It hasn’t been an expensive thing to do, we’ve done it all in-house, but it’s been a time consuming thing. It definitely paid dividends for Steve, and we’re hoping that it will pay dividends for #18 and #19 moving forwards.”

The third DJR Falcon of Jonathon Webb (#19) is still currently using the KRE-built engine that came with the Triple Eight chassis. The team plans to update the engine in Webb’s Falcon in the near future.