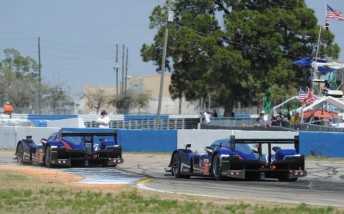 The Peugeots ran riot in the Sebring 12 Hour

The Peugeot Sport team are already looking ahead to June’s Le Mans 24 Hour race after taking a commanding 1-2 finish in the Sebring 12 Hour yesterday.

The race was not decided until inside the final half-hour, when Bourdais emerged from his final pit stop behind Wurz, and promptly spun in pursuit of the Austrian.

Peugeot’s win is the first for a French car-maker in the 58 year history of the event, and means the 908 HDi model has now won all three major sportscar races around the globe (after taking out the Le Mans and Petit Le Mans races in 2009).

After the race, team boss Olivier Quesnel was not surprisingly pleased with his team’s performance ahead of the French classic later in the year.

“Our mission here was to validate a certain number of developments and we achieved that goal to the letter,” he said.

“Reliability promises to play a key role at Le Mans, and the two 908 HDis ran like clockwork here. Our refuelling work, race strategy and the work of the entire team were all very strong, too.”

Le Mans will see significantly more competition for Peugeot however, with Audi returning to reclaim its spot at the top of sportscar racing with an updated version of its R15.

Much controversy surrounded Audi’s absence from Sebring, with the German manufacturer claiming it could not make alterations to the R15 to fit new regulations in time, and Peugeot resisting proposals for a detuned version of the current model to race.

David Brabham’s Highcroft HPD had looked oncourse to take out LMP2, having lead the class by five laps before an electrical fire caused considerable delays with three and a half hours remaining. This resigned the Australian to finishing fifth outright (and second in LMP2), some 18 laps down on the winning Peugeots.