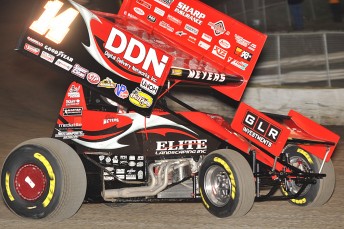 Jason Meyers is the new points leader in the World of Outlaws Series. Pic: Paul Arch

Californian ace Jason Meyers took out the main event at Kasey’s King of Bulls Gap presented by Budweiser at the high-banked Volunteer Speedway in Tennessee tonight.

The victory, his third on the World of Outlaws circuit this season, rocketed Meyers into the series lead ahead of Steve Kinser and Joey Saldana, who was leading the way entering this weekend’s pair of races.

After finishing seventh on the opening night of action on Friday, Meyers took over the front running in Saturday’s main event from Lance Dewease at mid race distance and, despite enduring a number of restarts, never surrendered it.

“After last night we dug down deep,” said Meyers.

“I’ve got to have one of the best teams in the pit area, if not the best. They work so hard and everyone is pulling together and working together to give me the best race car that they can. My hat is off to them. They make my job look easy.

“The restarts worked to my advantage. I wasn’t getting off the bottom very well and I got two or three chances to do it a little bit differently.”

Coupled with his seventh-place finish on Friday night, Meyers is currently fourth in the overall standings for the four race Showdown for the Bud Crown, with $15,000 going to the Top-Three in points after the four event in July. All four events will be promoted by Kasey Kahne in partnership with the World Racing Group.

“For Kasey Kahne and Budweiser to put this together and not only bring four races to the series, but the point fund as well, we can’t thank them enough,” said Meyers.

“It’s great to see companies like that involved and hopefully we can continue to put the GLR car on the podium and win the points for these four races.”

After not qualifying for the main event on Friday night in his debut at Volunteer Speedway, Lance Dewease rebounded on Saturday night to lead the first 13 laps of the feature before finishing second aboard the Advanced Development Services J&J.

Brad Sweet finished third in the finale to earn his second consecutive Top-Five finish at the blazing fast and ultra high-banked track. He was piloting the Auto Value Bumper to Bumper Maxim for Kasey Kahne Racing.

Paul McMahan finished fourth in the Great Clips Maxim to earn his second straight Top-Five at Volunteer Speedway and his sixth consecutive finish of eighth or better.

Steve Kinser came home fifth in the Bass Pro Shops Maxim and moved to within just five points of Meyers in the standings as he chases his record 21st series title.

The Kasey Kahne Racing outfit dominated Friday night’s proceedings with team boss Kasey Kahne pacing the field during qualifying on his way to lowering the lap record by over a second. Saldana won the main event in the Budweiser Maxim as Sweet finished a very strong fourth and McMahan rounded out the Top-Five, putting three of the four Kasey Kahne Racing machines entered in the race in the Top-Five.

The World of Outlaws return to action on Saturday, April 10 at Tri-State Speedway in Pocola, Oklahoma.