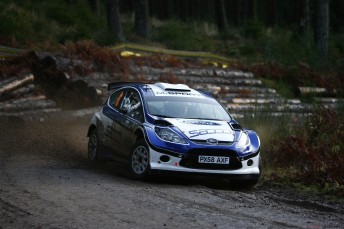 The S2000 version of the Ford Fiesta

Ford has accelerated development work on its all-new Fiesta-based challenger for the 2011 FIA World Rally Championship, following confirmation by the sport’s governing body last week of technical regulations for the series’ new formula.

An agreement on engine specifications that will apply from the start of next season was crucial in enabling Ford of Europe and rally partner M-Sport to step up development of the vehicle, which will be derived from the Fiesta road car.

The FIA’s World Motor Sport Council (WMSC) agreed the introduction of a 1.6-litre turbocharged engine, which can originate from a manufacturer’s base engine or be purpose-built in accordance with the new rules. It was the final technical decision to be taken following last year’s announcement that the new category for 2011 will be based on S2000 regulations.

Ford of Europe’s motorsport chief Gerard Quinn welcomed the WMSC decision. “It’s vital for the sport that we respond to greater environmental awareness and also reflect the direction that our road cars will take. It makes good sense to introduce the 1600cc turbo engine as early as possible, while using all the existing S2000 technical regulations that have proved so effective,” he said.

Ford’s 2011 championship car will be named the Fiesta RS WRC and will replace the record-breaking Focus RS World Rally Car. Since its debut in 1999, the Focus has won 42 world rallies, with highlights in 2006 and 2007 when Ford won the manufacturers’ world title. The car has scored points on 121 consecutive world rallies, a record dating back to the start of the 2002 season.

The Fiesta RS WRC will be based on M-Sport’s Fiesta S2000 rally car which was launched in 2009 and won its debut event, the legendary Monte Carlo Rally, in January this year. However, there will be significant differences between the two cars, not only with the new 1.6-litre engine, but also in terms of appearance.

Ford of Europe’s Executive Director of Design, Martin Smith, and Head of exterior design, Stefan Lamm, who are responsible for the styling of the company’s latest eye-catching models, have already turned their attention to the 2011 Fiesta RS WRC.

“The Fiesta is highly recognisable on the street. The rally car is all about functionality and we are working with our colleagues at M-Sport to make sure that it is just as bold and exciting to look at, as we’re sure it will be in action,” said Smith.

Engineers from Ford and M-Sport are co-operating closely on the development of the new turbocharged 1.6-litre engine, in conjunction with acknowledged French tuning expert Pipo Moteur. The future WRC car engine is based on Ford’s Duratec production unit.